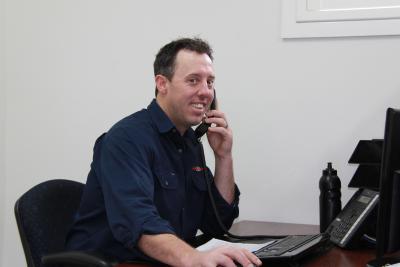 I’ve been a member of the Breakout River team since September 2006.

Before joining the team I considered leaving Cowra to pursue a career in insurance. With some words from a close friend and work mate, I was convinced to stay. Lucky I did as I was fortunate enough to meet my wife and we now have two beautiful girls Isabelle 4 and Scarlet 2.

I’ve been in the Meat Industry since 2001 starting in the Boning room as a meat packer, moving on to a slicer/boner where I received all my tickets. During this time I learnt a lot about quality meat which helps me send the best product to our customers every day.

I became a Meat Salesman in 2003. Throughout my time with Breakout River I’ve made some really good friends. It’s a great team to be a part of.

I’ve lived in Cowra since I was 5 and have a huge respect for our local community.

Throughout my years in town I’ve played a number of sports including, Rugby League, Soccer, Cricket, Basketball and Australian Rules.

My interests are fishing, watching footy, and having BBQ’s with family and friends. I’m a mad Wests Tigers supporter.